We will design a banner for successful online advertising

We will create a stylish and eye-catching ad banner so that people could find out about your company, promo events, and special offers. A distinctive feature of our banners is a well-planned design. A potential client will easily grasp the idea you want to convey, while the graphics and the special effects only serve to emphasize it. Our banners are easily noticeable and particularly effective. Some more useful information about banner making below.

So first — what is a banner? A banner is an advertising image, functionally identical to an ad image in printed media. What makes a web banner different from paper banners is that, in addition to the text and the pictures, it can include animated features and be partially or fully in video.

Besides static and animated banners, there are also text banners and interactive banners (created in Flash or Java and able to interact with the user). However, the first two types are the most popular.

This type of banners is the simplest and applicable in all advertising spaces. A static banner can be easily transformed into different formats, which is needed quite often. Banners like these take up only a few kilobytes of space on a server, which means the fastest loading speed on a webpage. Most commonly they are done in the JPEG format. The static format has only one disadvantage, though a significant one: it cannot be animated. You cannot add any animation to this banner, it will show only as a non-moving image. Example of a static image banner:

Animated banners, as mentioned before, come in different formats and for different purposes. Their main goal, however, is to attract attention with some cool animation. It is no mystery that, unlike a static image, a moving one is much more likely to attract a gaze. This is why, as technologies advanced, animated banners took the leading positions in the field of online advertising. Most typically they come in GIF or Flash. Their drawbacks are: more expensive compared to static ones; significant server space (and, consequently, website space); and higher tech requirements for an advertising space. Examples of animated banners:

Contact us and we will find the most suitable banner type for you, as well as create the most attractive and effective designs for successful advertising of your business. 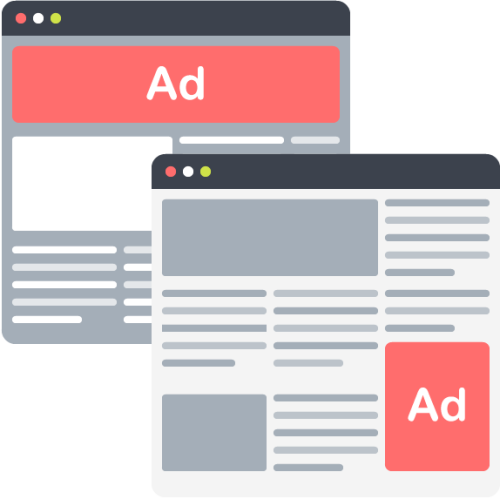 Other useful things about banner advertising

It is believed that the first banner in the Internet appeared in 1994. It was a simple image linked to another site. And this was exactly how the first banners were used, to directly advertise one site from another. It soon became evident that this sort of advertising has a tremendous commercial potential, which lead to explosive development of banner networks and infrastructure. In a banner network, one could buy, sell, or exchange banner impressions. Even today, this type of online advertising is the highest in demand, if with much more advanced technologies in modern banner systems. This happened mostly due to the development of the contextual targeting technology. With the help of this technology, the end user can only see the kinds of ads in which the user is potentially interested.

But how can the effectiveness of a banner advertising campaign be assessed? There is a number of basic parameters for that:

There are also other parameters that help calculate the effectiveness of a banner ad campaign, but these above are the main ones. Contact us and we can help you figure out the intricacies of successful Internet marketing.

Let's get in touch